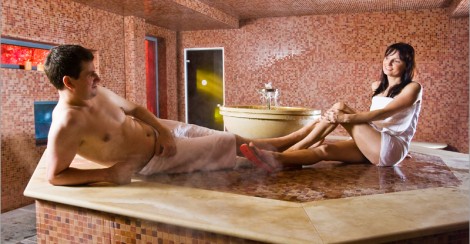 In Turkey, steam saunas (known as hamams) have existed for thousands of years, which is why they are commonly called Turkish saunas. The temperature is about 45°C.

A steam sauna is a veritable fountain of youth, since its effects on the body are health giving, restorative and relaxing. The saunas are fitted with steam faucets, from which steam is emitted at temperatures close to the boiling point of water. That’s why the steam saunas are always a foggy haze of hot air. Due to the high humidity levels and heat, steam baths are very effective with such ailments as bronchial asthma, bronchitis, catarrh of the upper respiratory tract, coughing and joint pain.

Steam also cleanses the skin – the largest organ in the human body. It is the simplest way of ridding the body of any built-up toxins, since they are expelled when the pores and sweat glands open up under the influence of the steam. As both circulation and the metabolism accelerate, the texture, elasticity, tone and colour of your skin improve.